I am writing with Dr. Welch in Brenham, and he made the best squash casserole. Rebecca suggested blog followers might enjoy the recipe, but I’d already eaten it before I took a picture, so I scraped up what was left in the tupperware and slapped it on my plate. Sorry Pioneer Woman, but my pictures of food look nothing like yours. Garden photos below recipe…

Topped with more bread crumbs and graded cheese, bake at 325 for 30 minutes. 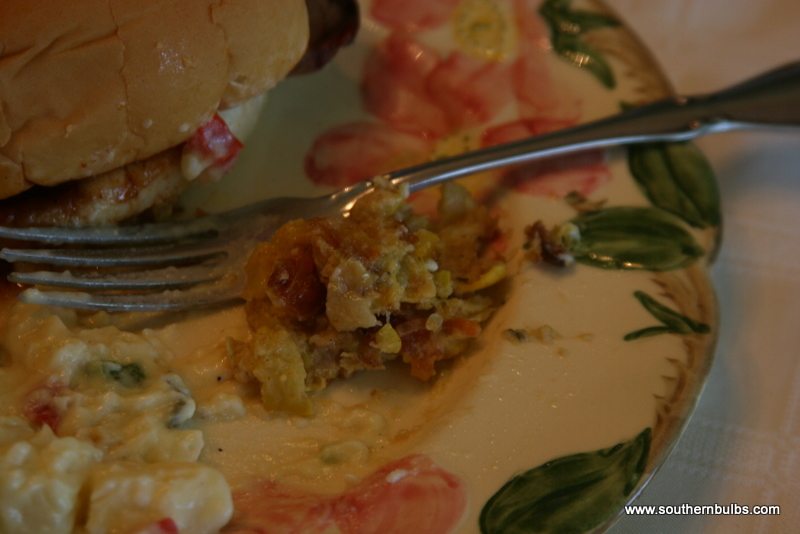 I took it upon myself to record our squash conversation verbatim:

“Yeah, I just made it up, but you can make it up too. I’ll tell you the ingredients,” Dr. Welch began.

“Ok…how much to use. Uhhh, I don’t know. How many people do you want to feed with this?” Dr. Welch asks.

“You want to feed four. O.K. I would do probableeeee a pound and a half or two pounds of squash,” was the thoughtful response.

“Squash. Yellow, straight necked squash is what I use.”

“Two pounds?” I ask again, not getting an answer.

“I think that’s about right. You need to make a fair amount. If you have a little left over it’s no crime,” he quips back. “It won’t stay left over for long. And maybe a medium sized onion, chopped up.”

“And then I parboil all of that in just a little water.”

“What does parboil mean?” I ask as a novice

“With just a little water with it’s top on it and you just kind of steam it ‘til it’s tender.”

“A little water on the top of it?”

“Yeah, on the top of the squash, maybe with that much squash [add hand measurements] add a cup to a cup and a half of water,” Dr. Welch’s patient response.

L“So you don’t completely submerge it; I see what you’re saying.”

“No, I don’t want to loose too many of the vitamins. So, you do that until it’s tender maybe 12-15 minutes, and then you set it off the heat.

“So this is the whole squash right now?”

“No! It’s a…you didn’t listen,” he says with rising inflection

“And the onion is chopped. O.K…this, this recipe all kinds of variations can take place. I’ll tell you how I made that batch, o.k. And the onion and the squash and then you can put in, maybe you can put some butter in, you need to put some butter in at that point—a third or a half a stick of butter. And then you put in a cup of, a cup of ….seasoned bread crumbs you know that come in a little container.”

“Mmm, hmm.” I agreed not really knowing what he was talking about. “Did you say half a stick of butter?”

“A third, or something like that…put as little or as much as you want on it,” he says becoming annoyed at my persistent questions.

“An then the uh, bread crumbs, what is the brand that is so good? There’s a particular brand that’s so good, but any way, seasoned breadcrumbs. It will usually have a little…you’ll buy it in a little can. Then I put about maybe a cup of low fat sour cream.”

“O.K. Now, you were just going to tell me the ingredients in the beginning. I’m really glad you told me the rest. You’re giving me a look right now, but what were the ingredients?”

“O.K. let’s see [list all of the ingredients here] and PROGRESSO seasoned bread crumbs.” As thus the breadcrumb riddle was solved and we have a recipe, and they’ve already loaded Rebecca up with plenty of squash.

And a walk through the garden revealed some beautiful plants and plant combinations:

2) This ‘John Fanick’ Phlox has lasted three days as a cut flower here.

3) A couple of plant combinations for crinums.

4) We were working at Twin Oaks today just outside of Brenham, TX