We made it back to the farm after our trip across the South and the only really exciting thing to mention was the fact that the original milk and wine lily crinums had now put on their gigantic seed pods where flowers had once been. These pods eventually pull the flower stalks down to the ground, and the top of the flower stalks fall about 2 feet from the original plant. Where these pods fall, we see new crinum begin to pop up and grow. That is why we see populations of crinum in area where all the clumps are spaced about 2 feet apart. The more tropical crinum, like Crinum asiaticum, will actually grow along the side of water. When the pods fall in the water, they float. When by the sea, the pods, which can also tolerate the salt water, will float through the currents, island to island. Hence, we have island populations of crinum!

We weren’t home long, and we turned around for a weekend visit/wedding shower in Round Rock, just north of Austin. Our friends bought a home. It went on the market one day, they could only see it that night, another Realtor was waiting to show it to their clients after they left that evening, they decided to put an offer on it the next morning, but it was already under contract. That contract fell through and they acted quicker the next time. I guess that is how fast you have to act in Austin right now to buy a house (that is priced right). Housing markets have their ups and downs, and populations grow and shrink, but little did our friends know that just minutes up the road from their new house is Georgetown, TX where have seen one peculiar red tulip growing and thriving in Texas for at least the last 50 years! A reminder that we are surrounded by horticulture treasures here in Texas and we might not always realize it! Another amazing thing to me, and this is why Texas was so inhabitable originally, is that water flows freely in so many areas. Behind this friends house is a creek that flows bountifully all year long!

After the Austin trip it was back to the farm for a quick drop off of plants and gathering of some other items. I was delighted to see our white woodland painted petals blooming!  That was on May 20th of this year.  We posted them for sale and sent out a newsletter blast, and we sold out of what we had in about a day.  We should have more next year!  Anomatheca laxa ‘alba’ – http://www.southernbulbs.com/white-woodland-painted-petals/ 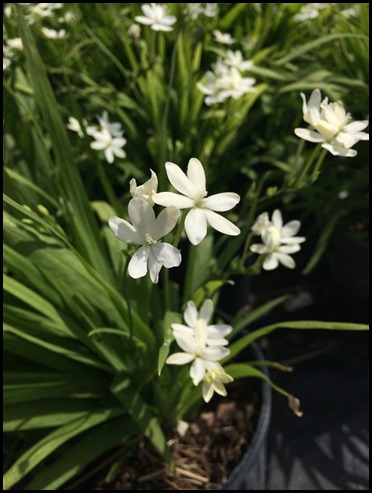 But I wasn’t home long, and was whisked away to Sierra Vista Growers (http://www.sierravistagrowers.net/), a large nursery in El Paso on the border of Texas and New Mexico. It pretty much helped fill the void in the area when Black’s Nursery, the old time well known  nursery ran by Charles Black began to decline. (note: I couldn’t find much about Mr. Black but I did notice he was quoted in an interesting article by Texas Monthly in 1990 that can be seen here: http://www.texasmonthly.com/story/old-man-and-secret). From what I hear though, Eastside Discount Nursery has purchased the old land is making a serious nursery comeback. Watch out El Paso! You now have an amazing nursery on your west side/New Mexico border and on the east side.  Be sure to visit Sierra Vista Growers online!